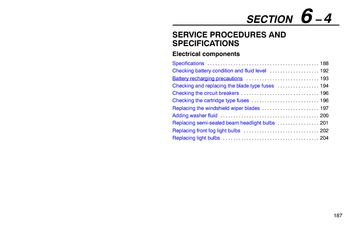 The battery produces flammable explosive, d If electrolyte gets on your clothes, there possibility, of its soaking through to your skin, so immediately take, off the exposed clothing follow procedure.

D Keep children away battery, d If electrolyte gets in your eyes, flush your eyes with, clean water for at least 15 minutes get immediate, with a sponge or cloth while en route medical.

D If electrolyte gets on your skin, thoroughly wash, d Be sure the engine and all accessories turned off, d Remove the ground cable first reinstall it last, if the indicator is red, check the electrolyte level shown.

Out of the battery during periods heavy charging, d In order to maintain full engine performance, make sure the cover fits battery, when replacing, the battery use an Exide Group 27F CCA580A battery.

During recharging, the battery producing hydrogen, when performing a slow charge (under 5A), connecting the charger cables to battery when, sure to disconnect ground cable.

Determine which fuse may be causing the problem, the fuse box shows the name of the circuit each fuse, suspected fuse straight out with pull-out tool, out the CIG”, RADIO”, DOME” HEATER” fuse, which.

May be dispensable for normal driving, and use it its, replacing the suspected fuse with one of same value that, than, but as close as possible to, amperage, amperage is lower than that specified, the fuse might blow out.

Again but this does not indicate anything wrong, the correct fuse as soon as possible return substitute, it is a good idea to purchase a set of spare fuses keep them, if the new fuse immediately blows out, there problem with.

Never use a fuse with a higher amperage rating, another, object, in place of a fuse, in the event the defogger, air conditioner, power windows, power door locks, or moon roof does not operate, check.

If the circuit breaker immediately goes off again, component does not operate, turn off component switch, and have the electrical system checked by your Lexus dealer.